We stand on the brink of a technological revolution that will fundamentally alter the way we live, work, and relate to one another. In its scale, scope, and complexity, the transformation will be unlike anything humankind has experienced before.

On our study trip to Automation Valley, we learned about Industry 4.0 and the digitalization of German manufacturing. On the way back to Denmark, one of the other participants said, “yep, the Germans set the standard”. This is indeed the case, even in a very literal sense: They’re making Industry 4.0 a German DIN Standard, and are aiming for international standardization.

The German Electrical and Electronic Manufacturers’ Association, and its partners, have developed the Reference Architecture Model for Industry 4.0 (RAMI 4.0). Today supported by the Plattform Industrie 4.0 network, RAMI 4.0 is held as a key standard for Industry 4.0. 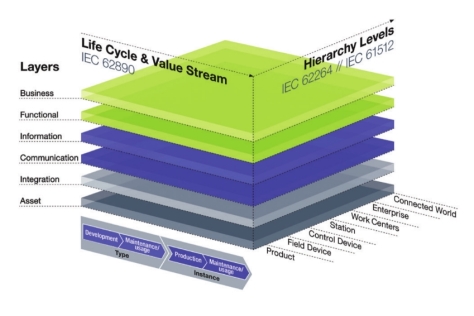 a three-dimensional coordinate system that describes all crucial aspects of Industrie 4.0. In this way, complex interrelations can be broken down into smaller and simpler clusters.

The coordinate system is further described as follows:

Indicated on the right horizontal axis are hierarchy levels from IEC 62264, the international standards series for enterprise IT and control systems. These hierarchy levels represent the different functionalities within factories or facilities. In order to represent the Industrie 4.0 environment, these functionalities have been expanded to include workpieces, labelled “Product”, and the connection to the Internet of Things and Services, labelled “Connected World”.

The left horizontal axis represents the life cycle of facilities and products, based on IEC 62890 for life-cycle management. Furthermore, a distinction is made between “types” and “instances”. A “type” becomes an “instance” when design and prototyping have been completed and the actual product is being manufactured.

The six layers on the vertical axis serve to describe the decomposition of a machine into its properties structured layer by layer, i.e. the virtual mapping of a machine. Such representations originate from information and communication technology, where properties of complex systems are commonly broken down into layers.

Together, the axes form a model that can be used as follows:

Within these three axes, all crucial aspects of Industrie 4.0 can be mapped, allowing objects such as machines to be classified according to the model. Highly flexible Industrie 4.0 concepts can thus be described and implemented using RAMI 4.0. The reference architectural model allows for step-by-step migration from the present into the world of Industrie 4.0.

…RAMI 4.0 provides a common understanding for standards and use cases….RAMI 4.0 can be regarded as a kind of 3D map of Industrie 4.0 solutions: it provides an orientation for plotting the requirements of sectors together with national and international standards in order to define and further develop Industrie 4.0. Overlapping standards and gaps can thus be identified and resolved.

The International Electrotechnical Commission (IEC) white paper on Factory of the Future explains further that when establishing interoperability in manufacturing environments, different dimensions of integration have to be considered:

RAMI4.0 has now been put forward for standardization in Germany as DIN SPEC 91345 – Referenzarchitekturmodell Industrie 4.0.  It often takes years for a DIN SPEC to become an official DIN Standard, but now the process has begun, and since Industry 4.0 seems to be a high priority area for DIN, they may decide to fast-track this standard.

IEC has put Industry 4.0, including RAMI, high on their agenda. In their call for their general assembly later this year, IEC outlines its future plans and strategic goals for Industry 4.0 reference models and architectures:

Defining reference models separately as independent standards for the purposes of simplification and avoidance of unintentional deviations, and for better understanding.

The relevant IEC committee would probably be TC65 who also owns the three IEC standards included in DIN SPEC 91345, but there are likely many other TCs in IEC who eventually become involved with Industry 4.0. The same will many other standardization organizations and initiatives. The Technical Management Board (TMB) of the International Standard Organization (ISO) has set up a Strategic Advisory Group (SAG) on Industry 4.0/Smart Manufacturing. This SAG should cooperate closely with the International Electrotechnical Commission (IEC) and the International Telecommunication Union (ITU), and is supposed to report back by September 2016. Most of this work takes place behind closed doors, and the SAGs homepage is not very informative.

The “Life Cycle & Value Stream” axis is based on an unpublished standard, and therefore difficult to assess. The 2016 status report shed some light on this, and states that:

The distinction between type and instance is classic in software engineering and information modeling. RAMI 4.0 maps the asset categories to the life-cycle dimension and the value stream.

Architecturally, this is an interesting approach. But someone really needs to work on the visualization and explanation of the dimension. The status report hints that the IEC 62890 standard will explain it all.

The “Hierarchy Levels” (with IEC62264) dimension is based on the classic ISA-95 which dates back to the 1990s (but is still maintained).

ISA notes that the purpose of ISA-95 is:

To create a standard that will define the interface between control functions and other enterprise functions based upon the Purdue Reference Model for CIM (hierarchical form) as published by ISA. The interface initially considered is the interface between levels 3 and 4 of that model. Additional interfaces will be considered, as appropriate. The goal is to reduce the risk, cost, and errors associated with implementing these interfaces. The standard must define information exchange that is robust, safe, and cost effective. The exchange mechanism must preserve the integrity of each system’s information and span of control. 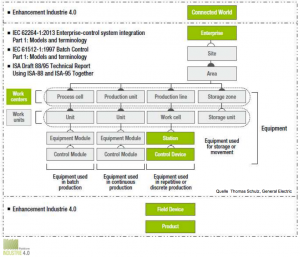 The status report seems to acknowledge that RAMI 4.0 may not have hit the nail:

All in all, the ordering schema along the y-axis is just a presentation help for fostering an intuitive understanding of the architecture. In case the terms or aggregation steps do not fit into the respective domains, they can easily be readjusted.

serve to describe the decomposition of a machine into its properties structured layer by layer, i.e. the virtual mapping of a machine. Such representations originate from information and communication technology, where properties of complex systems are commonly broken down into layers.

“The nice thing about standards …”

“…is that you have so many to choose from,” Tanembaum‘s old “joke” about standardization, applies here: RAMI 4.0 is not the only standard for digital industry reference architecture.

the open membership, international not-for-profit consortium that is setting the architectural framework and direction for the Industrial Internet. Founded by AT&T, Cisco, GE, IBM and Intel in March 2014, the consortium’s mission is to coordinate vast ecosystem initiatives to connect and integrate objects with people, processes and data using common architectures, interoperability and open standards.

IIRA is presented as follows:

This Reference Architecture is a statement of what the most important Industrial Internet architecture components are, how they fit together and how they influence each other. It reflects consensus on major architecture questions among participants from energy, healthcare, manufacturing, transportation and public sectors.

I will look closer at IIRA in a future blog post.

IIC and Plattform Industrie 4.0 in March 2016 announced that they will work together to align RAMI 4.0 and IIRA – Cooperation Among Two Key Leaders in the Industrial Internet – see press release and blog. They released some initial mappings:

Industrial cultures and their “movements”

In the end, the panel did not agree on whether there would be ultimately one platform or many. But they did agree that they share a common view on the need to gain an understanding of how things should function and making sure that they interact.

Kris Bledowski from the US-based Manufacturers Alliance for Productivity and Innovation compared the movements about a year ago:

Over the years, many other “industrial” reference architectures have been established. Many of these are sector-specific. For example, in the oil industry, POSC Caesar Association (PCA) and MIMOSA have established PCA-MIMOSA Reference Architecture Framework for Integrated Engineering and Operations in 2013. It describes

a reference architecture for defining, designing and classifying IT applications, systems and infrastructure in the upstream oil and gas industry, downstream petrochemical industry, and for engineering, procurement and construction projects.

Fast forward, and many frameworks and methodologies later, GERAMs authors did a recent review of the last 20 years with reference architectures, and observed,

We believe that the future of EA is in its ability to develop an interdisciplinary language and theory enabling a concerted and synergistic application of contributions of underlying disciplines (results from management science, systems, industrial, manufacturing and software engineering, IS, Artificial Intelligence, and so on).

GERAM is a valuable baseline meta-framework  – to discuss the above, to create new theories, schools of thoughts, integration of engineering practices and tools, explanations of how technologies can be part of EA, methodologies for EA implementation, and Partial and Particular models for re-use.

As discussed in a previous blog post, and explored in a Special Issue on Future Perspectives On Next Generation Enterprise Information Systems of the Computers in Industry journal, we need to renew our reference architectures and architectural practices:

No doubt that the next generation of enterprise information systems will continue emphasising the need for scalable, reliable, extensible, flexible, highly available and maintainable systems architectures providing ubiquitous, plug-and-play, secure, interoperable and networked solutions to realise smarter and collaborative systems, platforms and ICT infrastructures for all entities operating in a common business ecosystem.

The reference architectures we define and use must reflect our architectural visions. RAMI 4.0 and IIRA are two different visions. Which one will be best? As we architects always say, “it depends”.